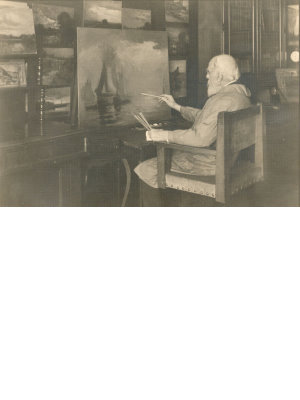 At a very young age, Hammond was recruited by his father to work as a marble cutter.  By the time he was barely a young man, he had joined a local militia and, by 1860, he had gone to seek fortune in New Zealand.  That experience would mark the first of many peregrinations all over the planet that would be the hallmark of John Hammond’s life giving his art a sense of grandeur and adventure reflected in his landscapes, seascapes and other depictions of life and nature.

Upon his return to Montreal in the mid-1860s, he could be found working as a staff photographer for the famed William Notman but his adventurous streak would soon take him to more exotic locales.  He then joined the Geological Survey of Canada that was in the middle of laying the tracks for the Canadian Pacific Railway.  That is also the time when he became a devout Christian, a trait that would be reflected in his art for the rest of his life.

By the 1880s, he was in Europe, painting in Holland and in France with the likes of painters such as James Whistler and Jean-François Millet.  A member of the Royal Canadian Academy of Arts, he would also participate in the 1886 Paris Salon and his work would be shown at the London Royal Academy and the New York National Academy of Design.

Back in Canada, he was commissioned by William Van Horne, president of the CPR to create murals for the railway’s hotels and offices throughout Canada.

In 1893, he was appointed head of the Fine Arts department of Mount Allison University in Sackville NB.

The artist passed away at the age of 96 in 1939, leaving an oeuvre that can now be found in major collection through Canada, including the National Gallery and the McCord Museum.

John Hammond in the media